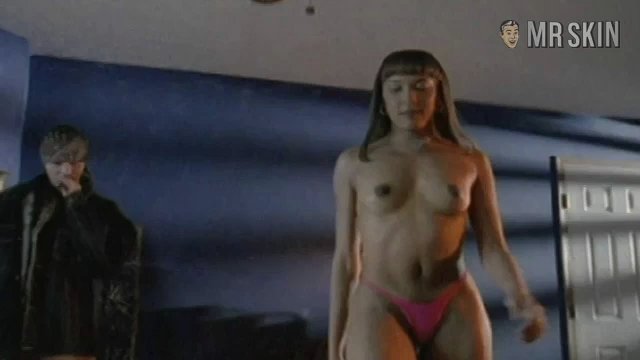 Jacked Up (2001)
Nude, breasts, butt 00:50:00 Get a load of Tenika's chocolate cha-cha's and that awesome thonged-booty as she gives some homeboy a lap-dance.

Tenika popped her pert patookis out onto the Skinematic scene in 2001 with quite a steamy Skinful role in the straight-to-video release Jacked Up. (We’ll refrain from the obvious masturbation-related jokes…) Tenika landed the choice role of “Roxanne” in the gang-banger flick, which pretty much meant she was one seriously sketchy urban hootchie. In fact, we’re pretty sure everyone in the film, including the requisite mother-type-figure, was a hootchie. Shizzles, dey hizzles! Regardless of the direction her character takes, Tenika manages to flash her firm B-cup flapper-flesh during a bump-and-grind sequence with some rather lucky young ghetto youth. She keeps her hot pink thong panties on, though but they offer up an imagination-free look at her camel-toe from the backside. Hell, we have a handkerchief with more fabric in it than those panties have! Whoever that costume designer was…well, they should win a fucking Oscar. They have our vote, anyway.

8 Pics & 1 Clip
Nude, breasts, butt 00:50:00 Get a load of Tenika's chocolate cha-cha's and that awesome thonged-booty as she gives some homeboy a lap-dance.
Live Cams - View all