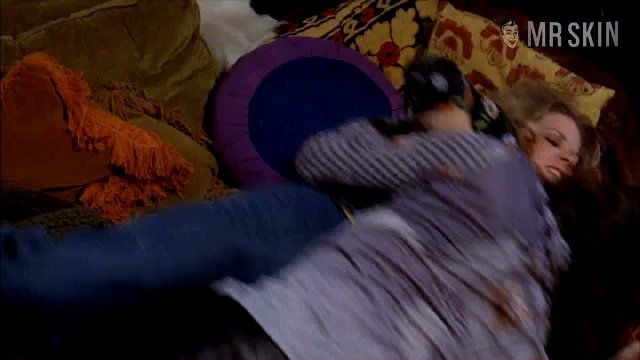 Candy Stripe Nurses (1974)
Nude, breasts 01:03:56 Groupies Kimberly and Elana present their perfect twin sets while trying to join a foursome with their idol. You'll be hard as a rock (star)!

For three whole years in the mid-'70s, Elana Casey was the cream of the sexual exploitation revolution. Unfortunately, when the smoke cleared Elana was no closer to a mainstream cinematic career, and she disappeared before our very eyes after her appearance in Everyday (1976). Perhaps it was because she didn't show any skin in that particular gem. Regardless, Elana made the most of her two other appearances on celluloid. She burst onto the skinematic scene in Candy Stripe Nurses (1974) as the rock-star-loving "Zouzou." She (and about four other babes) flashed her high-set itty-bitties in the role, as well as her perfect posterior, so these nurses are good for what ails you. Incredibly, the skinfullness of that particular role paled in comparison to her follow-up flick, aptly titled The Boob Tube (1975), which was written by and also starred Chevy Chase. The movie featured a whole host of honeys in compromising situations that involved some state of nudity or another. Elana's been involved in not only a lez-tabulous sequence but also a full-frontal orgy scene that makes one want to grab their tube. She may have eventually struck out, but when Casey was at bat the game was titillating.

3 Pics & 1 Clip
Nude, breasts 01:03:56 Groupies Kimberly and Elana present their perfect twin sets while trying to join a foursome with their idol. You'll be hard as a rock (star)!
Live Cams - View all