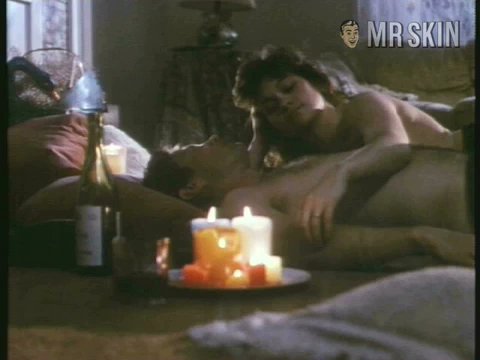 At 14, Valerie Bertinelli scored the role that would define her career, Barbara Cooper, one of two daughters of a divorced mom on One Day at a Time. The show ran on CBS for over a decade, and one day at a time male audiences tuned in hoping to catch a glimpse of the button-cute Valerie in the buff. No luck. Then button-cute rock guitar god Eddie Van Halen romanced the panties off of the innocent TV vixen and married her. Van Halen had a smile like the cat that just ate the canary in every music video that made it into heavy rotation on MTV as he alone has sampled Valerie's hidden goods -- although she does provide an sumptuous silhouette of her sacks while saddled atop Richard Dean Anderson in Ordinary Heros (1986). She continues to work on that wrongly nicknamed boob tube, where, on shows such as Touched By an Angel, it's highly unlikely she'll ever flash what she's kept so tightly under wraps. Only angels get to touch that heavenly treat.

One Day at a Time - as Barbara Cooper

Touched by an Angel - as Gloria