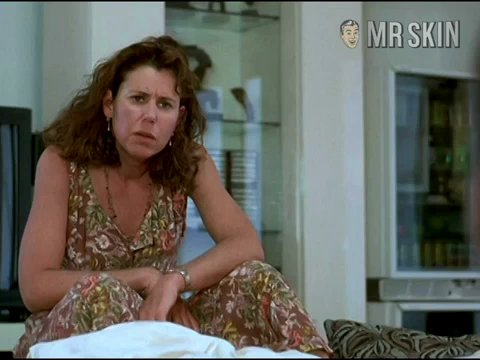 I'll Do Anything (1994)
Sexy Julie Kavner is skintastic in this sexy scene!

Julie Kavner is best known for providing the grating voice of Marge Simpson, the wife with the blue hair by Frank Lloyd Wright on the hit series The Simpsons. But her career started out when she landed a part as Valerie Harper's sister on the sitcom Rhoda in 1974. The role garnered an Emmy for the up-and-coming actress, but, sadly, her live-action work was a little lackluster after the show's demise. That is until Woody Allen started putting her in damn near every movie he made in the '80s. Sorry, the funnylady has been a bit skingy in her career, although she showed some cleavage in a gaping dress in her outing I'll Do Anything (1994). Mr. Skin will do anything to see more of Marge's muffins.

The Simpsons - as Marge Simpson

Tracey Takes On... - as Midge Dexter