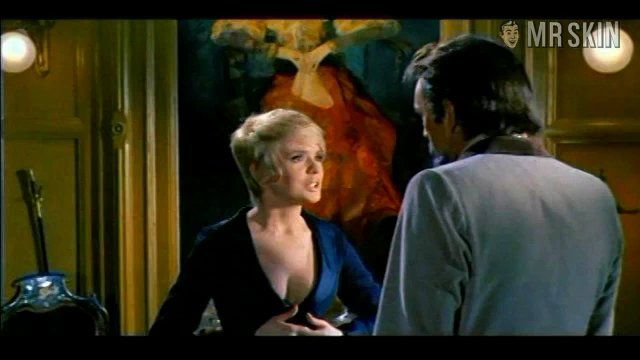 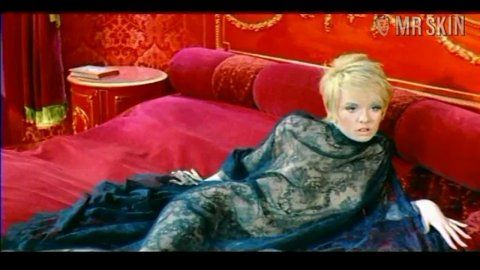 Barry Williams of Brady Bunch fame described Joey Heatherton as the "white-hot, vaguely slutty-looking sex goddess" of the '60s. In fact, this crop-topped blonde bopper was one of the sassiest, swingingest chicks around. Little Joey did it all. She released teenage dream singles like "When you call me baby" and made TV appearances on everything from Route 66 to I Spy. It was Joey's work on variety shows such as The Jackie Gleason Show and Dean Martin Presents that truly showcased her dynamic, sex-kitten energy. She sang, danced, wiggled, and jiggled in teeny frocks, catching the eyes and flies of every red-blooded male with a television set. Her USO tour with Bob Hope caused temporary crippling in many a soldier's wrist. Joey's little figure filled the big screen in Bluebeard (1972). She debuted perfectly pointy peaches, proving her tits were as perky as her personality. Expectations were dashed when she appeared in The Happy Hooker Goes to Washington (1977) without flashing even an ounce of flesh. Offscreen Joey was everybody's pal. She reportedly slept with a wide variety of men, from Perry Como to the entire Rat Pack. Eventually she married Lance Rentzel, wide receiver for the Dallas Cowboys, but that ended when he was arrested for reportedly exposing himself to a ten-year-old girl. Oh, Joey, will you never win?

Joey and Dad - as Herself