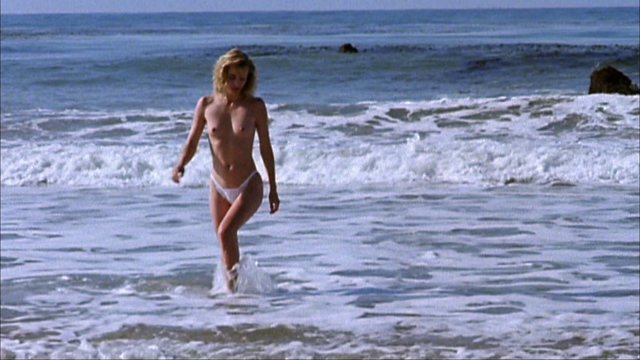 Slave Girls from Beyond Infinity (1987)
Nude, underwear, breasts 00:35:49 Cindy distracts some alien robots when she whips off her bikini top and splashes around on the shore, boobs bare. 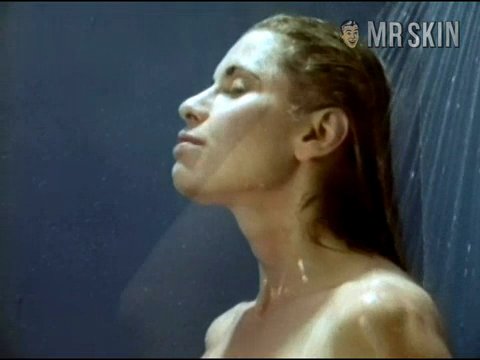 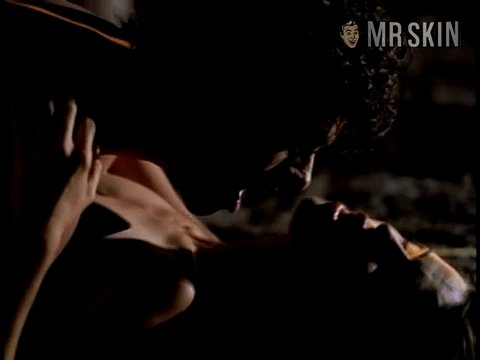 South Beach Academy (1994) Nude, breasts 01:26:42 Excellent kajoobs from Kaitan during a midnight bang on the sand. 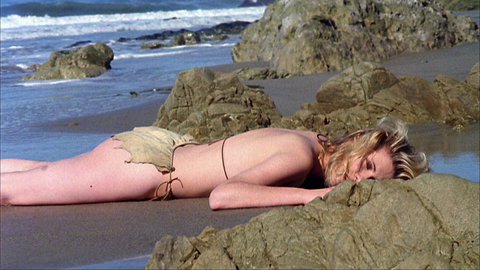 Elizabeth Kaitan is a Hungarian honey who makes Americans hungry for her big, natural, milky jugs. She came to the United States to become a movie star, and though she's no Hollywood hotshot, her skinful career has made her the money shot here at Skin Central. No one takes you seriously when you take your clothes off in every movie. Who cares; Elizabeth takes her clothes off in every movie she's in! That's batting a thousand in the making-our-bats-hard department. From her first nude appearance onscreen in Violated (1984) to her last lustful flash in Virtual Encounters (1996), Elizabeth has been the queen of quim. Her blonde hair, big boobs, round ass, and well-trimmed trim--and her willingness to expose them all the time--have made her the act-chest to beat off to. She hasn't been seen much, though, since Veronica 2030 (1999), and this sexploitation and scream queen is sorely missed. Speaking of sore, it's been a few years now, Elizabeth, and Mr. Skin's joint has finally recovered from the frantic whacking at your expense. What we're trying to say here at Skin Central is we're ready for another round with your mounds!

2 Pics & 2 Clips
Nude, breasts, thong 00:10:43 Enter lesbo heaven, with brunette Lesli and blond Liz pressing their pair together while wearing nothing but G-strings.
Nude, breasts, butt 00:39:20 Kaitan soaks up her steaming T&amp;A while her guy reams her in an old-fashioned bathtub.

7 Pics & 2 Clips
Nude, breasts 01:26:42 Excellent kajoobs from Kaitan during a midnight bang on the sand.

10 Pics & 3 Clips
Nude, breasts 00:12:00 Liz whips her amazing and all-natural orbage out of her tight top during some sexy role play with her guy. She'll put a billy club in your pants!

10 Pics & 5 Clips
Nude, breasts 00:38:00 Liz's lungbags are on display as she reclines for a little chest massage...on the floor of some warehouse.
Nude, breasts, butt, bush 00:46:00 Quick beaver cameo and a healthy dosage of knockerama as Elizabeth strips and gets jiggy with some lucky fool. And check out those old-school centerfolds all over the wall!
Nude, breasts 01:08:00 Partial boobs as he undresses her, then boobs after.
Nude, breasts 00:33:00 Nice close-up of Liz's left ta-ta getting a squeeze while she's having some pre-sex in a stairwell.
Nude, breasts 00:31:00 Liz yanks her dress away and caresses her lovely left balloon as she thinks lusty thoughts.

2 Clips
Nude, breasts 00:41:00 Nice look at Elizabeth's naked knockers in the shower with a guy.
Nude, breasts, bush 00:45:00 Elizabeth drops her dress while getting intimate with a dude. We get quick right breastmeat and a flash of side-pubes.

8 Pics & 2 Clips
Nude, breasts 00:11:00 Get Assaulted by Liz's Killer Boobos when she walks around topless backstage.
Nude, breasts 00:41:00 To the beat of a totally '80s soundtrack, luscious Liz gets an outdoor makeover, baring amazing bits of buxom boobage as her team of dancing stylists gussy her up.

Slave Girls from Beyond Infinity (1987) - as Daria

12 Pics & 7 Clips
Nude, breasts, underwear 00:38:48 Gazongas galore pogoing on her dude's dork in bed.
Nude, underwear, breasts 00:35:49 Cindy distracts some alien robots when she whips off her bikini top and splashes around on the shore, boobs bare.
Nude, bush, bikini 00:09:59 Liz hoists herself off the beach sand, her lady loincloth flips up, and bam! BUSH!
Nude, bikini, breasts 01:05:17 The real Beal bares right side baboob while fighting off some overamorous dude on a table.