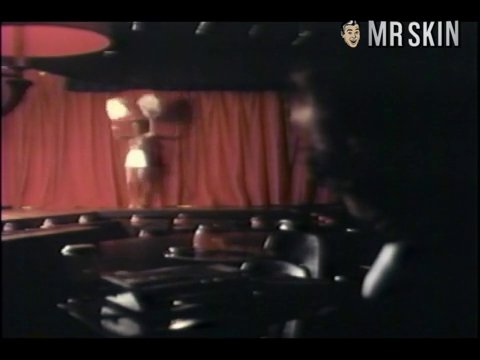 Some Call it Loving (1973)
Nude, breasts 01:15:00 Topless cheerleading on stage for Zalman King (yeah, THAT Zalman King). Then off comes the skirt. Then it's Naked Cheerleading! Rah-rah-RAW!!!

If there’s anything in the known universe that’s better than a topless cheerleader, it’s a totally naked cheerleader! Yowza! One such example of this scientific hypothesis comes in the form of the spectacularly tasty Brandy Herred, a long-legged and luxuriantly lung-pocketed young lass who popped up and out in only one obscure jiggle flick. The movie was Some Call it Loving (1973), and Brandy bared all we cared to snare as she posed as a perpetually jiggling cheerleader for an understandably impressed Zalman King. (Apparently Mr. King only acted in softcore titty flicks before he became the Orson Welles of softcore titty flicks.) And when the bouncing boobers get just a little monotonous, Brandy shirks her skirt and gives us a birthday-suit display for the ages! Why Zalman never hired this statuesque siren for future projects is beyond our comprehension.

1 Clip
Nude, breasts 01:15:00 Topless cheerleading on stage for Zalman King (yeah, THAT Zalman King). Then off comes the skirt. Then it's Naked Cheerleading! Rah-rah-RAW!!!
Live Cams - View all