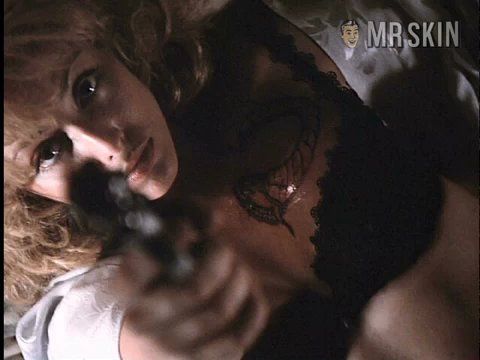 The revenge thriller Blue Tiger (1994) tells the story of a young mother (Virginia Madsen) who, when her son is killed in the crossfire of a Yakuza war, becomes an obsessed vigilante, even getting a blue tiger tattoo to match the one she saw on her son’s murderer. Unfortunately she doesn’t get the tattoo on any part of her body that we at Mr. Skin are interested in seeing, so if you want to get a look at Virginia’s V-rockets, you’ll have to pay a visit to The Hot Spot (1990). Still, you can almost see the Madsen mams as she covers herself in a shower scene. Tigers aren’t the only things that turn blue, you know.