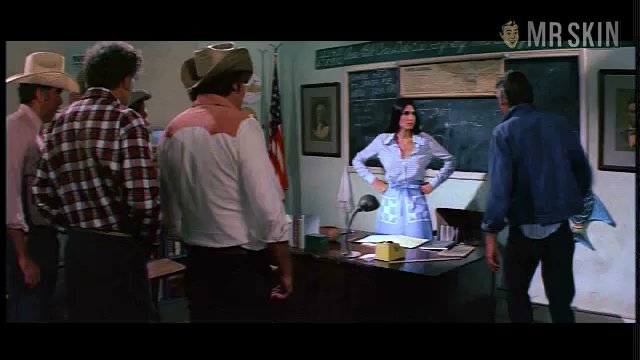 Johnny Firecloud (1975)
Nude, breasts 00:56:35 See Sacheen's not-so-littlefeathers while she's being roughly manhandled up by a gang of baddies.

Sacheen Littlefeather was born Maria Cruz but took advantage of her Native American heritage when her career took off shortly after her appearance in Il Consigliere (1973). At the Academy Awards ceremony that year, Sacheen made headlines by standing in for Marlon Brando and refusing his Best Actor statuette on his behalf, saying that her leg hurt or that she had a Wounded Knee . . . or something like that. She got cheers and jeers from the audience, but, unfortunately for Sacheen, this pretty much landed her in the stereotype of "squaw-in-trouble" for the remainder of her career, which, not surprisingly, didn't last all that long. She claims the FBI blacklisted her. Thankfully, before that happened Sacheen flashed some skinitude in Johnny Firecloud (1975). In that film she played a squaw in danger of being assaulted by a bunch of oppressive white fellas, who just so happened to remove her blouse for a nice look at her big bow and arrow. That sure made us play with our Littlefeather!

4 Pics & 1 Clip
Nude, breasts 00:56:35 See Sacheen's not-so-littlefeathers while she's being roughly manhandled up by a gang of baddies.
Live Cams - View all