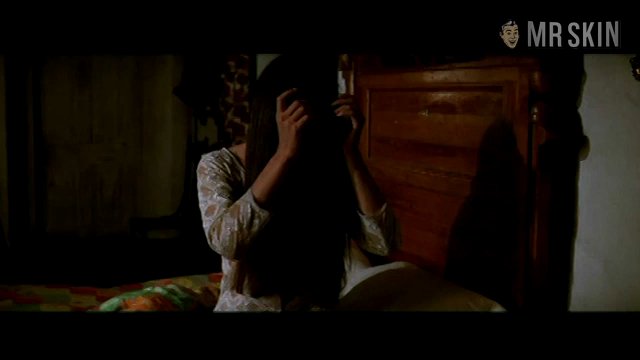 Pat Garrett and Billy the Kid (1973)
Nude, breasts 01:43:00 She de-shirts and gets into bed. Would be a clearer shot of her Billy the Tits, were it not for her very long hair!

Blessed with a smokingly sexy singing voice and exotic Native American allure, Rita Coolidge shot to superstardom in the '70s, wailing onstage with legends Eric Clapton, George Harrison, Joe Cocker, Bob Dylan, and Jimi Hendrix. With her sensuously unique sound, Rita made major wampum with "Higher and Higher." Lovely Rita's luscious lungs caught the flies of randy rockers such as Graham Nash, Stephen Stills, and '70s super stud Kris Kristofferson, who married Rita in 1973. This Cherokee cutie shocked Hollywood with hits such as "All Time High" for the James Bond thriller Octopussy (1983) and "Love Came for Me" for Splash (1984). Rita made her own waves premiering her tiny teepees onscreen in Pat Garrett and Billy the Kid (1973). While her ta-tas aren't statuesque, her pointy totem poles are worth the trip to the video store for a peek. With an undying natural beauty and over thirty years of soulful crooning, this deliciously dark lady continues to take fans to higher and higher levels of lust and inspiration.