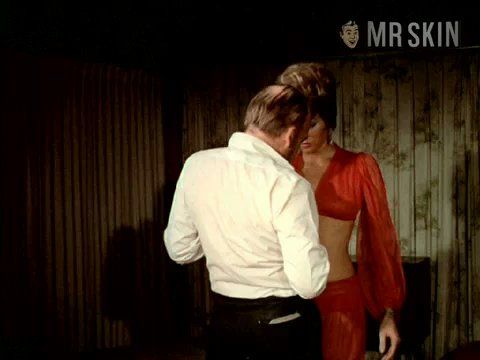 Nan Cee “Star Ted” her “Ca Reer” in 1971 with a role in the soft-core Drive-In classic Midnight Plowboy. Unfortunately, it turned out to be the only film this comely One-Time Wonder ever appeared in according to our ever so accurate, patent pending SkinOscope. Her all-too-brief career didn’t keep her from dropping her briefs and showing some serious Skinage, though… As the “Madam” of the whorehouse around which the “plot” of the film revolves, Nan manages to show off just about every inch of her truly voluptuous frame in a very-nearly explicit sex scene with the lucky “stiff” who plays her paunchy, balding husband, in order to teach her “staff” a thing or two about coitus especially to get ‘em started, get ‘em wet, lickety split kind! Make sure to check the flick out if you can get your hands on a copy… Nan’s sex scene is but the icing on the proverbial cake, adding to the already saturated Skinage in the flick provided by the likes of Terri Johnson, Linda McCrae, Cristy Anna and Debbie Osborne, all of whom flash beaver, breasts and buns, creating an almost non-stop gratuitous nudity fun-fest of a film. It’s a keeper so add this one to your collection.