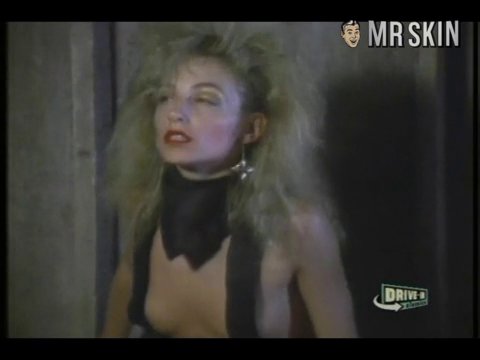 After a world-renowned (OK, not really) debut as Topless Dancer in the 1980 comedy Middle Age Crazy, Michele Chiponski (a.k.a. Misha Lachat) took a well-deserved break from Hollywood, returning eight years later to portray the evil and futuristic dominatrix in Empire of Ash II (1988) (which, based on the clips we’ve seen, could have been called Empire of Ass II) before taking off to parts unknown. And speaking of “parts,” you can catch a few nip-slips and cheek-peeks in that flick, which you may be able to track down under the title of Maniac Warriors. But why would a fetching female foreigner choose something goofy like “Chiponski” as a stage name? (Or why would a girl called Chiponski change her name to “Lachat”?) Bah, who cares? The girl’s hot!