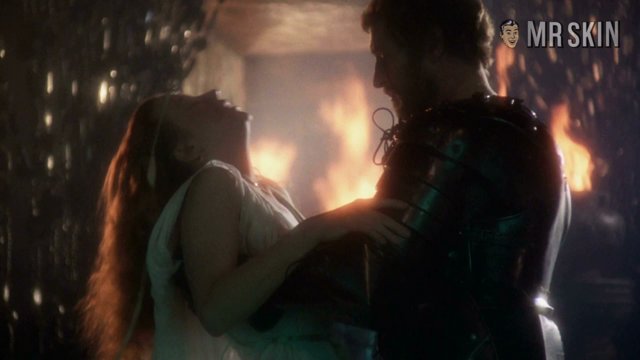 Excalibur (1981)
Nude, breasts 00:14:36 Boorman ain't boring, and neither are her magnificent mams. Her knight wears his armor as he nails her--now that's what I call "wearing protection!" 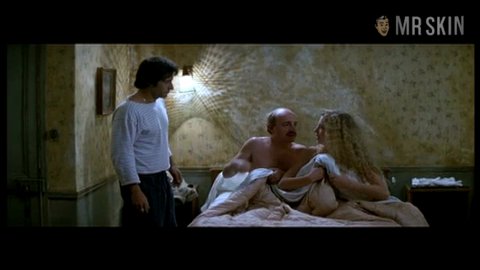 Katrine Boorman is the daughter of legendary director John Boorman, who brought us such films as Hell in the Pacific (1968) and Deliverance (1972). No surprise then that she got her start in the acting arena with a bit part in daddy's film Zardoz (1974), which starred Sean Connery. After taking some time to finish puberty, Katrine returned to the silver screen in another one of her papa's masterpieces, Excalibur (1981), opposite then-unknowns Gabriel Byrne, Patrick Stewart, and Liam Neeson. In the brief time that she was onscreen, pop saw fit to show the world exactly what the fruit of his loins looked like under all those period costumes, directing her in an eye-popping scene. Katrine goes under Byrne's flesh sword while he's dressed in full armor--talk about safe sex. She's gone on to a career beyond her father's camera but, thankfully, without giving up his influence. Katrine must have made Big Daddy Boorman proud with her sexy topless scene in Le Bonheur est un mensonge (1996). Katrine maybe a Boorman, but she's never a bore, man.

6 Pics & 1 Clip
Nude, breasts 00:14:00 Boorman becomes Boobwoman when she bares her bobblers getting out of bed.

5 Pics & 1 Clip
Nude, breasts 00:14:36 Boorman ain't boring, and neither are her magnificent mams. Her knight wears his armor as he nails her--now that's what I call "wearing protection!"
Live Cams - View all