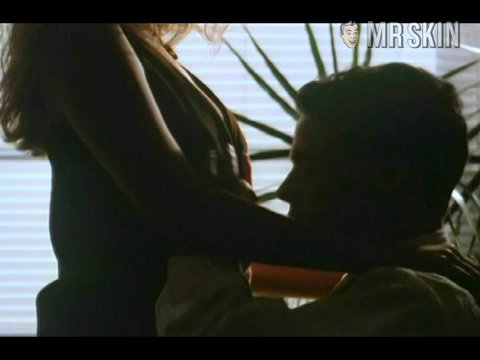 The amply alluring Ashley Graham has a resumé overloaded with B-movie mania. Not that we’re casting aspersions or anything. We love the low budget, the bizarre, the cheap, and obscure--partially because they’re lots of fun, but mainly it’s for the boobs! Ashley’s first grown-up role came in Gypsy Eyes (1992), which offers not only Ashley’s apples but those of the criminally cute Claire Forlani too! From that point, the tasty Graham cracker sure did keep busy. She popped up (and often out) in B-level flicks such as Warrior of Justice (1996), The Hit List (1993), The Last Bullet (1995), and Shadow Warriors (1996). (What’s with Ashley and all these warriors?) Her final foray into funsville came in Laughing It Up (1997), which is also known as In Search of a Woman . . . as if Ashley isn’t enough woman for ya!