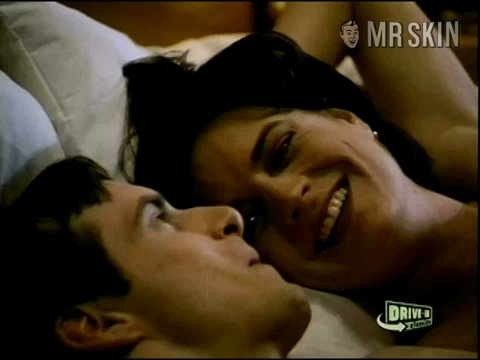 Many are the unsung heroes of skin. Tamara Bick is one of them. The pretty brunette is not a household name, likely not even in her own household, but she’s made an impression on the pants of the staff here at Skin Central, and for that we salute her. She began her professional career in a made-for-TV movie called Against Their Will: Women in Prison (1994), which is as fine a way to get your feet wet as we can think of. She landed a spot on the Seinfeld episode “The Abstinence,” where George finds his mental capacities sharpened by not having sex. Thankfully Tamara didn’t take that advice and for her next job worked topless on top of some lucky guy in the movie Motel (1998). It’s her only skin scene, but her boobs speak a thousand whacks. The rest of Tamara’s career is spotty, ending up in Sorority Sluts 3: Spring Break! (the Outtakes) (2001), where she played Sorority Slut #3. But she’ll always be number one in Mr. Skin’s little black book.

1 Clip
Nude, breasts 00:28:00 A gorgeous gal straddling her guy with boobs (mostly the righty) out and a pile of money. Now that's the good life.
Live Cams - View all