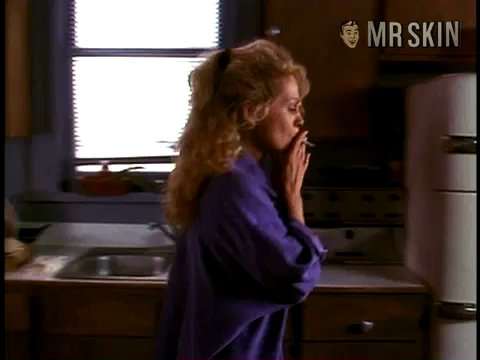 Sharon Farrell may have started her career with a supporting role in Kiss Her Goodbye (1959), but this busty blonde was no kiss-off. It took a few years, but in 1962 she finally found a modicum of fame with a role on the short-run TV series Saints and Sinners. After a string of semi-successful cinematic appearances in the '60s, Sharon returned to the boob tube in the '70s for a seemingly endless stretch of made-for-TV movies and a gig on the long-running hit TV series Hawaii Five-O. Success reached this comely lass when she was cast in the hit film The Stunt Man (1980) opposite the most suggestively named actor outside of Dick Van Dyke, Peter O'Toole. That started a good run for Sharon and for those who wanted to see her shapely form more closely, as they got a good look at one of her massive mammaries in Out of the Blue (1980) opposite Dennis Hopper. The plot is as perverse as its leading man, so if the forbidden familial love storylines harsh your boner, then one would be better off checking out Lonely Hearts (1982), which features an equally brief look at her mommy mounds. Unfortunately, Sharon returned yet again to the boob-less tube in the '90s with a stint on the hit soap opera The Young and the Restless, and her skinitudity has waned ever since. We want Sharon Farrell sharin' her fair all again really soon!

Saints and Sinners - as Polly Holloran