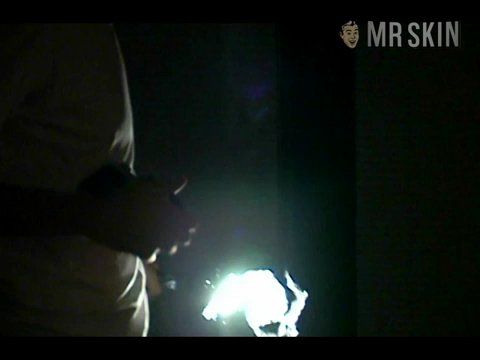 Kissing on the Mouth (2005)
Sexy, underwear Julie Van DeWeghe is skintastic in this sexy scene!

Julie Van DeWeghe’s short, but sexy, film career only encompasses one movie, Kissing on the Mouth (2005), in which she had a bit part as an and underwear model. Her scene is artfully shot as she poses in a dark room wearing only her bra and panties while a guy shines a flashlight on her and snaps some pictures. She isn’t nude, but her body does look great in her matching black undies and the artistic feel of it all lends the scene a certain eroticism that will have you handling your meat flashlight. After this one film, Julie moved on and focused less on acting and more on writing including doing copyright work for various corporations. She may not be acting any longer, but her one bit part is sexy enough to leave you with a Van DeWood!