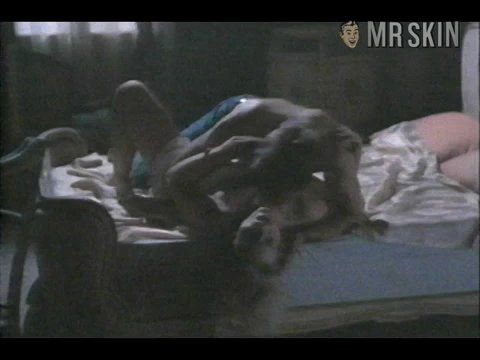 Killing Streets (1991)
Nude, breasts 00:01:00 It's dark, it's quick, but it's worth it--she and her dude are going to town on a bed, and you can totally see Runyon's Funyons for one brief shining second.

Jennifer Runyon cut her teeth on TV fare such as The Fall Guy, Charles in Charge, and Quantum Leap, but she's best known to fans of '80s comedy as the incredibly hot student body whom Bill Murray tests for clairvoyant ability in the beginning of Ghostbusters (1984). Jen's most titillatingly taunting moment on film comes in the tits-n-zits comedy Up the Creek (1984), in which a bunch of misfits took part in a white-water-rafting race where the only white-water that counted was the gallons that wound up on the girls' wet T-shirts. Jennifer finally delivered the skinage in the shoot-em-up flick Killing Streets (1991), in which she finally revealed the rosy-nipped chest bombs we've long suspected her of smuggling. Jennifer seemed to disappear after her appearance in Carnosaur (1993), but skineastes everywhere eagerly await this bodacious blonde's return!

Another World - as Sally Spenser Frame

Charles in Charge - as Gwendolyn Pierce