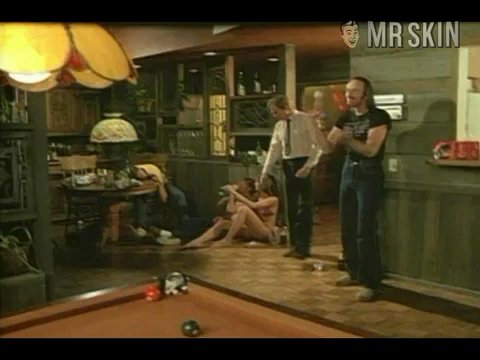 The Beach Girls (1982)
Nude, breasts 00:36:00 Topless strawberry-blonde Jeanette makes with the kabobs as she walks through a wild party.

The early 80s were a rough time for actresses, and it saw many of them swallowed up, never to be heard from again. One such actress was Jeanette Linne, who only appeared in two films The Beach Girls (1982) and Scarface (1983) before disappearing from film altogether. Not much is known about what she's been up to in the thirty-plus years since she left acting, but Mr. Skin salutes her not just for appearing in one of the most popular gangster films of all time, but also for appearing nude in her only other film, The Beach Girls. She can be spotted walking topless through some sort of party house, stopping to say hi to a guy while her hooters hang out, before being pursued by some dingus in a football helmet. We wish Jeanette the best, wherever she is, and thank her for the mammaries she left us with!

2 Pics & 1 Clip
Nude, breasts 00:36:00 Topless strawberry-blonde Jeanette makes with the kabobs as she walks through a wild party.
Live Cams - View all