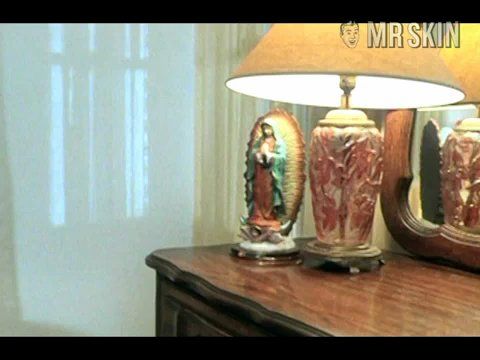 Venezuelan beauty Ileanna Simancas has been acting almost as long as she’s been out of the womb, landing a role on a TV show at only six months of age. She’s the daughter of Jean Carlo Simancas and Martha Mijares, two Latin American actors, and has been studying the craft since before she could walk because mom and dad were some serious cheerleaders for her to get screen time in their native Venezuela. She’s already surpassed her parents though in many ways, having worked as a fashion model and, more importantly, an act-chest in El Padrino: Latin Godfather (2004). She costars with Jennifer Tilly, but it’s Ileanna who bares the boobs and a thonged caboose.

2 Pics & 1 Clip
Nude, breasts 00:17:00 See Ileanna's left lobber and thong-clad caboose when she and her loverboy hit the (satin) sheets.

Ser bonita no basta - as Aracelis