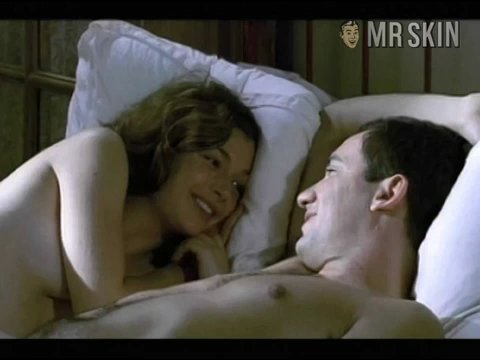 Marius (2000)
Nude, breasts 01:12:00 As she lays in bed chatting with her lover, we get a nice long view of Gaela's delicious French pastries. Who's for dessert?

Gaëla leapt gracefully into the acting world with a supporting role (with the likes of Arielle Dombasle and Maria de Medeiros…not exactly the B-list crowd.) in 1999’s Les Infortunes de la beauté. Does she have talent? Well, her next gig was in the title role of Marie, Nonna, la vierge et moi the following year. We think the answer’s fairly obvious…Although this innocent dark doe-eyed beauty, enjoyed quite an enlightened cinematic career, in France, no less, she’s shown surprisingly little Skin-itudity over the years. That’s not to say that she hasn’t shown any at all… (We’re pretty sure French actresses have to flash their flappers at least once on screen in order to get their union card…) For a better look at Gaëla’s French Cups, have a gander at 2000 made-for-French-TV flick Marius. She lets those puppies hang out for a good minute whilst she lies in bed and talks to some exceptionally lucky French feller. He half grapefruit sized breasts are curiously capped with swollen areolas and nearly inverted nipples. You will not be able to take you eyes off of them. Hoo-gah! That’s not French for anything but they seem to understand what I mean when I say that anywhere in the world!

3 Pics & 1 Clip
Nude, breasts 01:12:00 As she lays in bed chatting with her lover, we get a nice long view of Gaela's delicious French pastries. Who's for dessert?