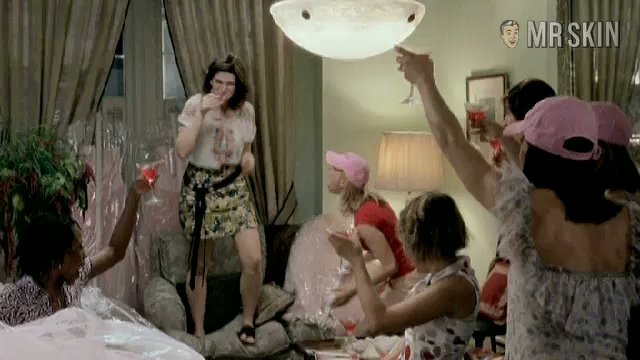 The In-Laws (2003)
Sexy, underwear Emmy Laybourne is skintastic in this sexy scene!

Proving that comely and comedy are a combustible mix, lovely laugh catcher Emmy Laybourne has made acting nutty a priority since her days as a Vassar College undergrad cracking jokes and breaking hearts in her first improvisational comedy troupe. Upon graduation, Emmy and her patented brand of funny physicality moved to New York City and hooked up with a crew of comedy cutups who were actually making money while making merry. The jolly jill’s fate was sealed, and destiny has led her to appear on Viva Variety and Premium Blend on Comedy Central, to occupy Apt. 2F on MTV, and to star as Molly Shannon’s vaguely lesbianic and totally special-ed best bud in the Catholic-school send-up Superstar (1999). For the finest in funny and flesh, follow the folly of Emmy the giggle-puss in The In-Laws (2003).

Running with Scissors - as Various