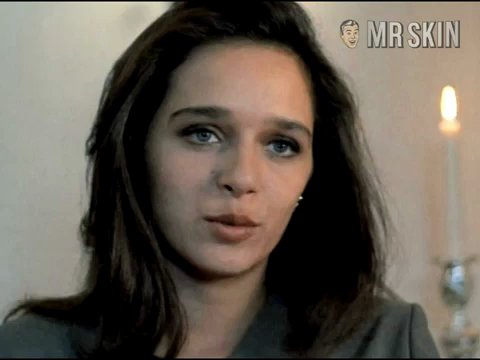 Year of the Gun (1991)
Nude, breasts 00:17:00 The heartbreakingly beautiful Valeria gives us a glimpse of her gorgeous gourds while she and her boy toy bump furries in the sack.

Year of the Gun (1991) is John Frankenheimer's film about the death of Italian prime minister Aldo Moro, who was abducted and murdered by a people's revolutionary movement known as the Red Brigades. Andrew McCarthy plays an apolitical American reporter who is dead broke at the center of the bolshie bull’s-eye—he's working on a novel, and its plot just coincidentally resembles the Red Brigade's nasty plans. No one believes that it's just a bad case of happenstance, and this pickle gets Andrew on the radar of not only the police and the reds themselves, but of brainy, ballsy Sharon Stone, a photojournalist with just about everything figured out. Valeria Golino is Andy's white-hot lover, but she, too, comes with an underlayer you can't see even when she's baring both hooter and scooter for the cameras. Sharon shows a wee bit of each herself, though that should hardly come as much of a surprise compared to the surprise twist Year of the Gun has in store when it gets close to revealing its own hind end.