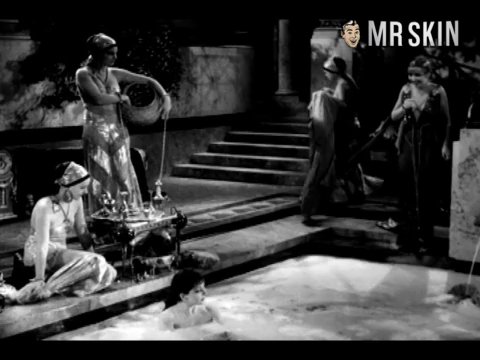 The Sign of the Cross (1932)
Nude, breasts 00:19:00 Colbert soaks her milkers in a milk bath, and as she yaps with her girl friend, her nips pop out of the surface of the water here and there to get some air. Skintage nudity!

Fire-loving fiddler Emperor Nero (Charles Laughton) picks a couple of innocent old Christians to blame for the flaming destruction of Rome in The Sign of the Cross (1932). As he’s about to send the said offenders to a purrfect catfight in the lion’s den, military official Marcus (Fredric March) falls in love with Mercia (Elissa Landi), the stepdaughter of one of the accused. With hopes of emancipating the eyefuls between Merica’s arms, Marcus lets the Jesus jonsers go free. Good God . . . you won’t believe the trouble he gets into when his belligerent boss and his undercover lover the Empress find out about his new charitable project. Soon a delicious double-crosser, pecker-popping pretty lady Poppaea (Claudette Colbert), adds a whole lot of unholy horniness to the scene, showing a stunning sign of skinematic change with a heavenly flash of her left shooting star.