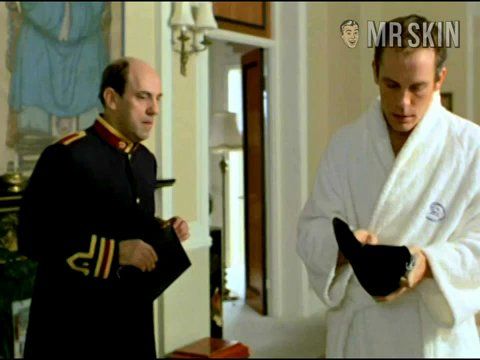 Object of Beauty (1991)
Nude, breasts, butt, body double 00:21:00 BODY DOUBLE: That's Andie emerging from the behind the magic curtain in a hotel, but those buns and left boob from behind are the work of a dastardly double.

Some smooth operators have such an innate sense of style that they can elevate living hand-to-mouth to an art form. The attractive, young, educated, articulate, and loving couple who provide the emotional highlights and physical pleasure to Object of Beauty (1991) reside in one top-flight hotel after another, scooting out just ahead of the bill’s arrival, shielding one another from the reality of being broke with zero prospects. The charming twosome’s one asset is a highly appraised statuette, the prized and only possession of the female half of this flawed but compelling human equation. To sell the woman’s validating artifact is out of the question, but faking its theft and collecting a settlement seems a perfectly logical course of action. Until the item goes missing and neither the man nor the woman can believe the other has not played a part in its abduction.