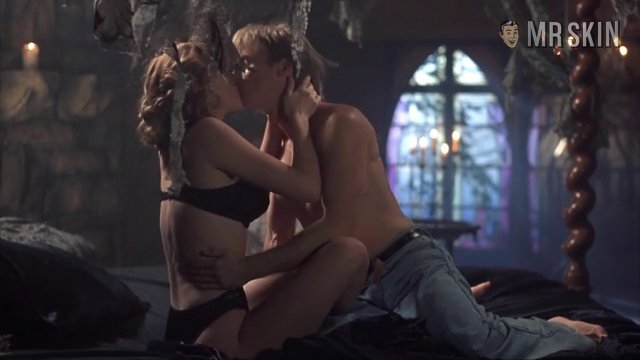 Night of the Demons 2 (1994)
Nude, breasts 00:39:00 Cristi loses her bra and treats her man to a view of two of the most perfect breasts ever committed to celluloid.

Demons. They always come back for more. Case in point: Night of the Demons 2 (1994). In the original Night of the Demons, malevolent spirits invade a party being thrown by Angela (Amelia Kinkade) and, even though the hostess is dead, she and the spooks return to crash another bash. When a gaggle of Catholic schoolgirls unwittingly unleashes the evil beings, nerdy Perry (Bobby Jacoby) and Sister Gloria (Jennifer Rhodes) fight back with, among other weaponry, squirt guns and balloons filled with holy water. Night of the Demons 2 is a wild, witty jaunt that brings on blood, boobs, Beelzebub’s minions, and a nun going Rambo all over the ass of the dark side.