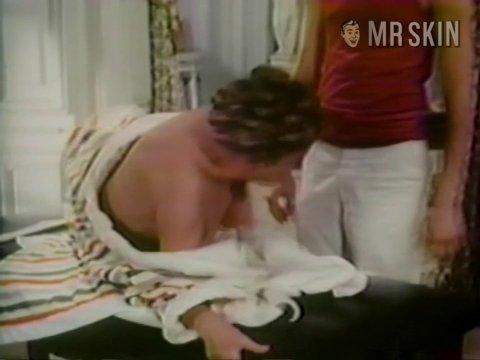 Savage Intruder (1970)
Sexy 00:30:13 Miriam gets a massage from some dude, and though she tries desperately to cover up, we get a quick flash of breasts as she gets off the table!

Born in 1902 into a wealthy family in Savanah, Georgia, Miriam Hopkins went to very exclusive private schools in Georgia before moving to New York to study at Syracuse University where, among other things, she studied dance. Her first paying job in the entertainment world came when she joined a dancing chorus girl line at the age of 20. Dancing professionally opened doors into the acting world. She established herself on Broadway before becoming a contract actor for Paramount. Her long, impressive film career started in the mid 1920’s and continued on until her last role in 1970. During this time she was nominated for an Oscar and worked with some of the biggest stars of the age. Miriam passed away in 1972 in New York at the age of 69.   Miriam gives us some top boob in the movie Savage Intruder (1970). While lying down on a massage table she sits up to say something to her massage boy and exposes most of her left knocker. She is in her late 60's here, but her hooter still looks great.