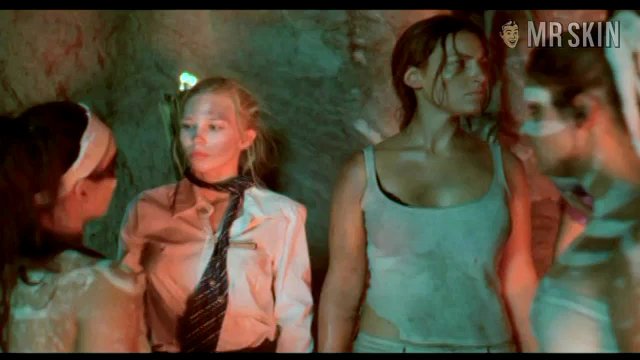 King of the Lost World (2005)
Nude, breasts 00:50:00 A gaggle of tribal babes (or are they Alice Cooper fanatics?) in black and white body paint help Amanda out of her shirt. Nice boob view!

Air travel is becoming more harrowing by the week, to the point where passengers riding within crashing jetliners should be forewarned that their ordeal will not even begin until well after they have survived the fiery impact and carved out a fortified niche from an encroaching and hostile Amazonian jungle. The giant spiders and mammoth scorpions will be remembered as but minor annoyances once the disgruntled air travelers have been menaced by the towering King of the Lost World (2005), a skyscraper-sized ape with a roar so fearsome that the sound of it might spin author Sir Arthur Conan Doyle from his very grave so that he too can sit entranced and mesmerized by this updated realization of his seminal work.