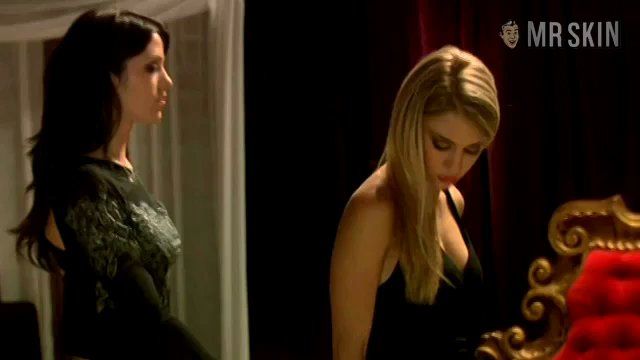 The Sisterhood (2004)
Sexy, underwear Jonna Giovanna is skintastic in this sexy scene!

Things seemed like they were really going great to start off Jonna Giovanna's career! She landed a plum role in the sci-fi remake Planet of the Apes (2001), but of course that movie was terrible and sidelined her career for three years. Thankfully she came back with a vengeance in the horror flick The Sisterhood (2004) directed by noted twink enthusiast David DeCouteau. Jonna shows off some unbelievable cleavage in a sexy bra and undies combo as she and co-star Sarah Michelle Ben Av have a hot and heavy make-out session, observed by Michelle Borth, who later joins in the fun to complete the lesbian trifecta! Jonna Giovanna will get you higher than marijuana!