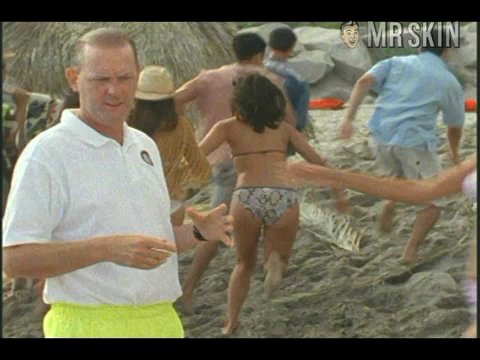 Son of the Beach (2000-2002)
Sexy, thong As she tries to seduce Timothy Stack, Janice goes from a bikini to a sheer teddy. She takes off the teddy, but she's wearing pasties. And all this for Timothy Stack!

Puerto Rican seductress Janice Montelione was born Janice Rivera, and though she only appeared on screen one time, she certainly made it unforgettable! Janice landed a role on the Howard Stern produced tv series Son of the Beach, and appeared on the episode "South of Her Border." Check out Janice looking super sexy in a bikini while scouring the beach for hot guys, and later in some luscious lingerie as she attempts to seduce Notch Johnson! As she moves in to kiss Notch, we get a nice look at some sensational side boob and her terrific tush in a thong! Janice Montelione will have you feeling as virile as a mountain lion!