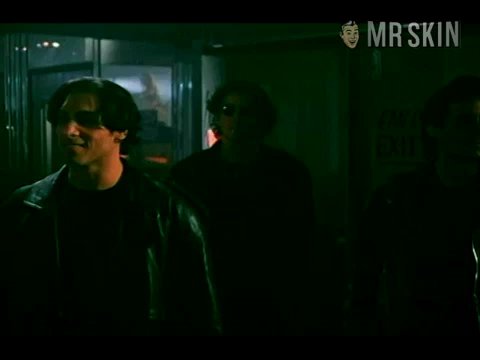 In the Kingdom of the Blind (1995)
Nude, breasts 00:09:00 The lovely Lisa peels like a pro onstage at a strip joint, breaking out some big, buoyant, beateous boobies.

The one-eyed man is king in In the Kingdom of the Blind (1995), a tense indie thriller directed by veteran actor Nick Vallelonga. Vallelonga stars as Al, a cop who finds himself on the wrong side of the law when his kid brother entangles himself in a botched mob hit. Unable to turn to the law, Al must rely on his street-smart instincts to avenge his brother’s death at the hands of a ruthless underworld boss (William L. Petersen). There’s a key lesson to be culled from Vallelonga’s blood-splattered drama: in the kingdom of the blind, the one-eyed man is the only one fortunate enough to scope the fairer sex. Lisa Falcone rewards the sighted in her role as a mob member’s girlfriend who strips for cash (and, it would appear, fun).