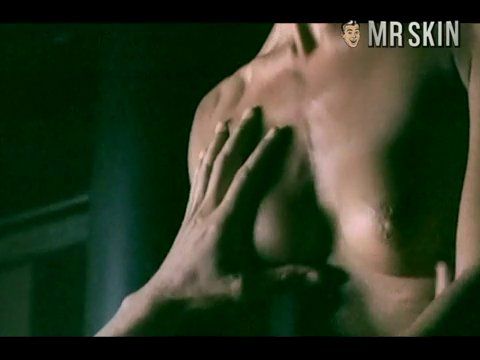 Crash Dive (1997)
Nude, breasts, butt 00:11:00 A few fantastic (albeit shadowy) flashes of DeBurdo's DeBoobos, DeButto, and DeBusho when she has sex in a submarine. Crash Dive? You'll wanna MUFF dive!

Super sexy Elena DeBurdo certainly seemed like she might be the next big thing, but instead she's best remembered for creating a big thing in your pants! This babe got off to a big start with a role in the made for tv movie The Rockford Files: Punishment and Crime (1996) alongside James Garner and Bryan Cranston. It was her next role, in the direct to video submarine thriller Crash Dive (1997) that really captured Mr. Skin's attention however! Check out Elena's steamy shower scene where she shows off her sexy silhouette behind a shower curtain. She then gives us a much better look at her comely casabas when she steps out of the shower and gets it on with some guy and rides him while he grabs those gazongas! This submarine is equipped with two tantalizing torpedoes!