Behind the Camera: The Unauthorized Story of 'Charlie's Angels' (2004) 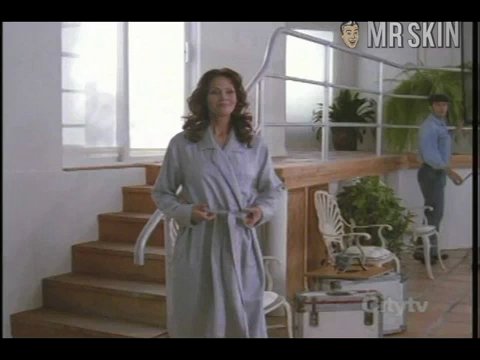 Behind the Camera: The Unauthorized Story of 'Charlie's Angels' (2004)
Sexy, bikini Christina Chambers is skintastic in this sexy scene!

Produced for the Biography Channel, Behind the Camera: The Unauthorized Story of 'Charlie's Angels' (2004) sets out to tell the story behind the popular TV show that aired on ABC from 1976 to 1981. Tricia Helfer, Lauren Stamile, and Christina Chambers do a skillful job of inhabiting the roles of Farrah Fawcett, Kate Jackson, and Jaclyn Smith, the three actresses who lofted the program to popular success. Because the biopic was produced without the cooperation of any of the original stars or producers, it’s free to take liberties with behind-the-scenes gossip. Director Francine McDougall opts to paint the stars in a ribald light, instructing Chambers to strip down to a tight white bikini.