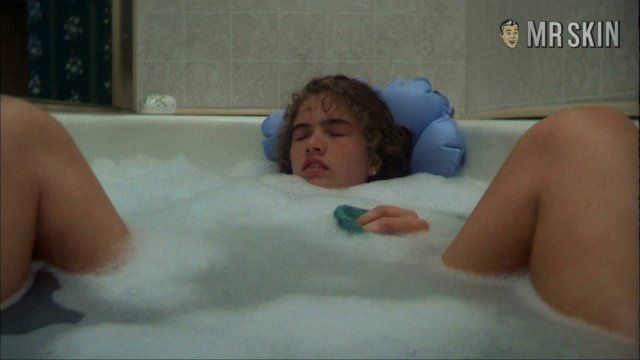 A Nightmare on Elm Street (1984)
Nude, body double, breasts 00:33:04 BODY DOUBLE: Heather gets attacked in the tub by the unseen. The underwater boobie shots are a body double, but the nip slip at the end is allll her.

The story is old now, but when A Nightmare on Elm Street (1984) first came out it was the most original and frightening horror movie in years. And remember, this was in the heyday of slasher pictures, so there were plenty of products to satisfy the gore consumer. Still, the very premise of a razor-fingered burn victim who enters your dreams but can actually touch you became as iconic an image as zombies or nuclear holocaust. Many sequels of this franchise have circulated in theaters, but it's hard to resist the first introduction to Freddy Kruger, especially since his first target was Heather Langerkamp. Though not as skinful as in later features, Heather's hooters turn this nightmare into a wet dream.